Canton owed much of its early population growth to these men who were able to envision a more fruitful and robust city. With this vision, they were able to bring in large corporations and jobs for many residents.

Since he was twelve years old, "Charlie" Babcock had two ambitions, a career in baseball, and to serve as mayor of Canton. Advancing from the little leagues in Canton to the semi-pro leagues in Cedar Rapids, he later served as an umpire locally and at times in the Mid-Atlantic League. He served as a recreation and playground director in several different communities. After a stint in the Marines, he returned to managing in the semi-pro leagues and was listed as a territorial scout for the Cleveland Indians.

He never forgot his desire to be a Mayor of Canton and in 1957 he defeated Gervis Brady for Mayor. He promised to complete Interstate 77, to replace the obsolete City Hall, and to update the Canton water system. He completed Interstate 77, delayed through engineering problems, property acquisitions, and disputed routing and financing.

He went to New York with consultant Ray Janson asking for a "signature" building incorporating local materials and labor. The architectural firm, Kelly and Gruzen designed a "curtain wall" building which after fifty years still appears as contemporary. A third major accomplishment was the updating of the present water system. Hiring an engineering firm, negotiating changes in state laws, Mayor Babcock facilitated the development of the Sugar Creek aquifer capable of providing over 50,000,000 gallons a day enough water to supply all of Stark County. 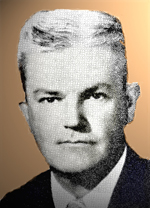 Charles Dougherty was born in Greentown, Ohio in 1850 where he attended public school. When he was nineteen, he walked to Canton with two dollars in his pocket. He planned to work to earn enough money for dental school. Ten years later he went off to Philadelphia to prepare a career in oral surgery. Graduating, he returned to Canton and practiced oral surgery for three years.

Less Than a Year to Live

After a severe nervous breakdown, he was told by his physician in 1882 that he had less than a year to live. Dougherty decided to move to real estate and insurance. In a career that would extend to 60 more years, he was responsible for bringing four major factory developers to Canton.

He worked for the Board of Trade, a predecessor of the Chamber of Commerce in personally raising $100,000 to bring the Dueber-Hampden watch company to Canton. He negotiated the deal to bring the Timken Company here. He personally contacted William Irwin to bring a Rolling Steel plant to Canton, and he brought John Carnahan who developed several steel and tin related operations to Canton.

The historian ET. Heald indicates that Dougherty in both bringing business and platting and developing the city extended the population of Canton from 30,000 to 130,000 in his lifetime. He was like the Ball, Aultman and Miller families who moved from Greentown to Canton because of access to the railroads. 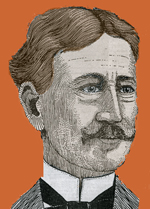 In downtown Canton, the Bow Federal building sits on Lots 52, 53 and 54 in the 1805 founder's plat of Canton. By 1855, Charles C. Martin had built a successful rope-making business on the site and his son, William H. Martin inventor of the monoplane - once in the Smithsonian- was born there. By 1892, the Odd Fellows benevolent society had built a four-story headquarter there. However, in the 1920s a very successful auto dealer, Ralph Hay, was to make history in his Hupmobile showroom in the Odd Fellows building.

In his desire to promote his business, and in his love for football, Ralph purchased the undefeated Canton Bulldogs in 1918 and pumped money into player salaries. Self-proclaimed national champions with Jim Thorpe as their outstanding athlete, the Bulldogs did not play in 1918 because of World War I. Undefeated in 1919, the Bulldogs claimed a National Championship. As the Bulldogs were the team to beat, Ralph received requests from other teams to play them and saw the opportunity to organize.

Hays called a meeting in his downtown showroom of three other Ohio franchises, Akron, Cleveland and Dayton forming the American Professional Football Conference. Chosen as secretary, Ralph contacted ten other professional teams to form a true professional league. On September 17, 1920, the ten owners of the teams met in the Hays Hupmobile showroom using running boards for chairs. The teams were:

They named the league the American Professional Football Association and nominated Ralph President. He convinced the organization that Jim Thorpe as President would bring prestige to the association. Thorpe served one year and was followed by Joe Carr. Later that year Detroit, Buffalo, and Columbus were included in the League and in 1922 the Conference changed its name to the National Football League (NFL). After winning the NFL title in 1922, Ralph sold the Bulldogs and in 1923 under the coach, Guy Chamberlin, Canton won its back to back NFL championships.

Because of Ralph's early passion for football and his investment in the Bulldogs, his meetings with other owners and his organizational role in developing the NFL on April 27th, 1961 Canton was selected by the NFL as the site for the Professional Football Hall of Fame. 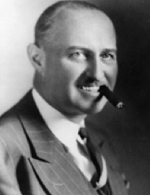 Born in Minerva, Ohio in 1918, Powell had dreams from the time he was nine years old of owning his own golf course. After returning from the army after World War I, he saw that unlike in Europe, many golf courses were not open to blacks. Two black physicians were willing to finance his dream and he transformed a 78-acre dairy farm into a 9-hole golf course. He worked as a security guard while spending the rest of his time developing the course.

Keep Your Eyes on the Prize

Opening in 1948, he concluded, you have to keep your eyes on the prize. His daughter Renee served as captain of the Ohio State women's golf team and joined the Ladies Professional Golf Association (LPGA) tour in 1967, In 1978 Bill opened the extended golf course with 18 holes.

Golf Family of the Year 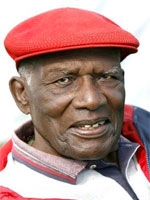 John Shorb with Bezaleel Wells played a major role in the platting and marketing of Canton. Born in Zweibrücken, Germany in 1758, he came to Baltimore in 1785 where he married Catherine Gross of Hohenzollern royalty, moving first to Steubenville in 1806. In 1807 he moved with his family - now three children- to Canton where he teamed with Bezaleel Wells in the marketing of Canton. That same year he was chosen on the state committee for developing a lottery to pay for the development of navigation of the Cuyahoga and Muskingum Rivers.

John bought 13 lots in the newly platted town and leased a store on the present site of the Canton Flower shop at 2nd and Market Southwest. Besides the thirteen lots within the newly platted town, he bought 640 acres from High Avenue west and from Tuscarawas North to beyond Fulton. He joined others in forming the first bank, The Farmer's Bank, on his lot in the middle of the Court House block. Shortly after the land office moved to Canton, he built a store on the present Chase Bank plot.

He engaged with Wells in the platting of Madison in Wayne County and when Wooster was chosen as County Seat, they abandoned the site. Later that area would become the Ohio State Agricultural Research Center. A devout Catholic, he invited priests from Bardstown, Kentucky to celebrate Mass on his property.

He gave a large plot of land on North Street -now 6th Northwest - and Plum-now Mckinley for St. John's Catholic Church. He provided the lumber and the land and while helping in the construction he was struck by a falling beam and died on July 24, 1824. 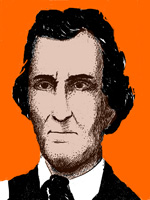