Many musicians, sculptors, and painters owe their success to the roots they established in Canton. Many of the experiences they had as Canton natives were mixed with their talents to form inspiring and meaningful art that is enjoyed by people everywhere.

Born in Ohio in 1876, Charles Clewell spent most of his life in Canton where he developed a process for producing pottery which has a unique metal-like patina. Clewell mixed pottery and metal to develop glazes that have never been replicated. He began experimenting with copper, brass and bronze materials and by 1909, had perfected the process.

Awarded for His Work

In 1923, Clewell achieved a blue-green colored finish and invented a way to both accelerate and check the color development in the pottery. He produced a prolific amount of pottery beginning in 1906 and received a medal for his work at the Paris Exposition in 1937. He worked for the Timken Roller Bearing Company from 1940 to 1951.

The process died with him in 1965. Ninety pieces of Clewell's work can be found in the Jessie Besmer Museum in Alpina, Michigan. The Canton Museum of Art has a small collection of his work. 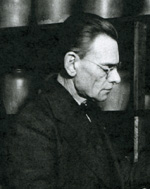 Henry was born in Canton, Ohio in 1915. After completing high school he enrolled at Princeton University majoring in economics and engineering. After graduating he joined the Coast Guard for a four-year stint during World War II. After returning to Canton he married while working at a corporate career. However, he decided to return to school to pursue his first love, sculpture.

He moved to Philadelphia attending the Tyler School of Art at Temple University. After graduating from Temple with a Master of Arts Degree, he received a Fulbright fellowship to study in Milan at the Academia di Brera. His work with Marino Marini led to his founding a studio in Milan.

He completed over twenty projects for the City of Philadelphia including the famous "Impala Fountain" at the Philadelphia Zoo, "Running Free," sculptured horses for Drexel University, and the "Betsey Ross House Fountain." He completed the "Pegasus" sculpture for the Great Court of the Canton Museum of Art in 1960. He is often compared to the sculptors, Antoine Louis Barye, Wilhel Friedrich Wolff, and Edward Kemey. Henry died in April 1980 in Charlestown, South Carolina. 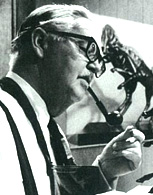 Larry was born in Cleveland, Ohio and after serving two tours in Vietnam attended Kent State University. After studying engineering at Kent, he opened a construction company in Canton, which became quite successful. In 1976 he began a hobby building ship models first from kits and later from blueprints from the Smithsonian. He built the ships to the exact scale of different woods imported from around the world.

From the keel up he constructed models of the Constitution and other frigates using bone, ebony, and bloodwood. The frigates which were the backbone of the navy for years took about three years to build. Larry spends about ten months in building these replicas to scale using over 150,000 hand-worked pieces in the process.

He recently completed the Oregon, McKinley's "Bulldog," a battleship cited for its heroics during the Spanish American War. Larry has built many ships under contract and over the years has developed a nationally significant collection displayed in his museum, "Blue Water Majesty." The Museum opened in Canton on land ceded in 1803 by Thomas Jefferson.

Clyde Singer was born in Malvern, Ohio in 1908 and spent much of his youth in drawing and sketching. After graduating from high school, he painted signs for the Canton Sign Company, and in 1931 he entered the Columbus Art School. He studied art under Kenneth Hays Miller, Thomas Hart Benton, and Franklin DuMond at the Art Students League in New York. He was the art critic for the Youngstown Vindicator and assistant director of the Butler Art Institute in Youngstown in 1940. His paintings are typically very similar to the cartoonist George Luks whose work as social commentary he loved.

Singer’s works often reflect local street scenes in which memories of the Strand Theatre, or the Arcade Market in Canton are found. Street scenes from New York, Pittsburgh, and murals for the New Concord, Ohio Post Office reflect a time gone by. The Canton Museum of Art has several of his works in its permanent collection. His work has won top prizes in exhibitions in the: 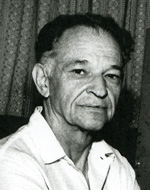